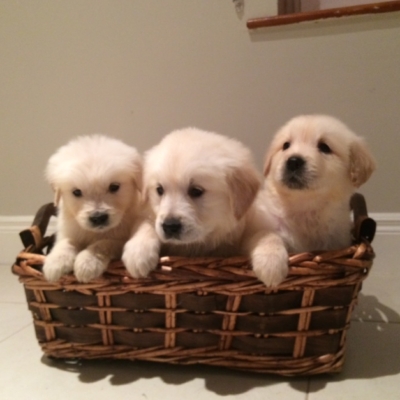 Well, that is after they grow past the helpless newborn mouse stage AND after they learn that decorating the house with homemade paper confetti isn’t the exact present you want. But how do we get them from the baby devil stage to the well-behaved puppy we all love and adore?

When a puppy is around 14 days old, there are five simple exercises that any handler can perform to help produce neurological stimulations which don’t naturally occur this early in their life: tactile stimulation, head held up, head held down, supine position, and thermal stimulation. Because these puppies are so young and fragile, we want to avoid overstimulating them. We only do these exercises 3-5 seconds each and only once a day. A little really does go a long way with these fur babies.

What are the benefits?

Studies show that performing these simple exercises have many benefits including stronger heartbeats and adrenal glands, an improved heart rate, greater resistance to diseases, as well as a greater tolerance to stress. These benefits make a huge difference in the pups’ performance in the future, especially while learning basic training and commands like sit, stay, down, leash walking, crate training, etc.

Also, while the puppies are accommodating to human interaction, we handlers can take a guess at their individual personality, whether the puppy resists (which they usually do) or whether they are calm. Now I’m not saying if this puppy resists, then he’s going to be a nightmare to take home. That’s not the case at all. It simply gives the puppy a head start while becoming acquainted with humans. So, to make both our and your lives easier with these Syrah golden angels, we perform this neurological stimulation as early as possible.

Early stimulation leads to a less distressed dog in training which leads to your ball of fluff puppy only making paper confetti when it’s time for puppy training school graduation! For further learning on this, please visit www.puppyculture.com.

Looking for a head start on obedience?