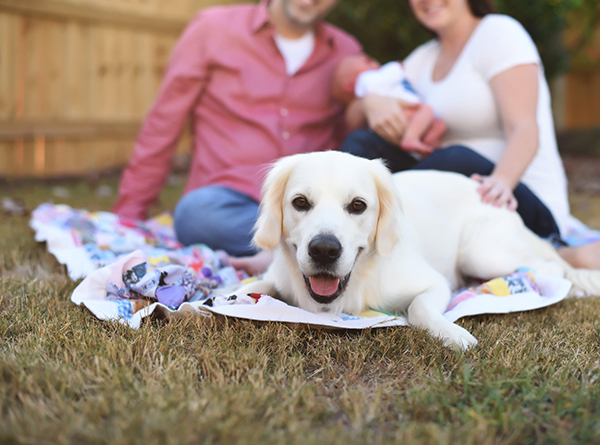 When we came across the Syrah Goldens website back in 2013, we had no idea how much Hollie, her company, and her dogs would become such an important part of our lives. After losing our dog Sadie, we decided it was time to add to our family again. Tim had always wanted a light colored golden, so our search began. We found the Syrah website and after our first conversation with Hollie, we knew she was the breeder for us. She was so compassionate about the loss of our Sadie and we could tell this was going to be more than just a business transaction. We picked up our little Laci in February of 2014 and Hollie has been family ever since. In late 2014 and in 2015 we experienced the loss of two pregnancies and, as strange as it may seem to some, Laci was a huge part in helping us through those difficult times. She never left our sides and was such a comfort to us. Always there for snuggles or simply to rest her head on our lap when she knew we needed it. And not only was Laci a comfort, but Hollie, Mary and Brittany were such huge prayer warriors and friends to us during this time. Their support has meant the world to us. (Just going to show they are more than just breeders.) We now have a 4 week old son, Owen, and Laci could not be better with him. We truly think she believes he is hers. She is always checking on him, gets concerned when he is fussy, and can’t stop giving him kisses. We think they are going to be the best of friends.

We also had the pleasure of recently fostering for Hollie a male pup named Asher for a few months before he left for his forever home in Ireland. This big boy completely stole our hearts in just a short amount of time and showed us again what incredible dogs Hollie breeds and produces. Such awesome temperaments and only the best in health.

Laci has now had puppies of her own, and we will be getting her puppy Hatti very soon. We cannot wait to add another Syrah pup to our family!

Here is a picture of Laci with her family. Doesn’t she look so proud of her new baby brother?