Tips for Introducing Your Older Dog to His New Puppy BFF 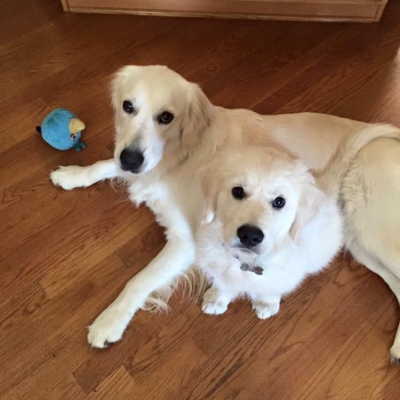 The first day you bring a new puppy home, your older dog can’t seem to hide his excitement. He’s thinking, “Oh goodie! A new friend to play!” One week later, he becomes skeptical and starts asking, “and you’re still here, why?” A couple of weeks later, the stage of acceptance surfaces. But how can you ensure a smooth transition for the household?

Here are a few tips:

When first introducing the new BFFs to each other, decide on a place of neutral grounds. Do this to avoid the older dog feeling as if an intruder is invading his personal territory. Also, remember to continue to give the older pup lots of attention. Bringing a new puppy home to stay can be stressful to the other dog, and he needs to feel secure of his place in the family.

Another thing to keep an eye of is possessiveness of treats, toys, food, etc. Be sure that there is something for each dog, so that the “toddler ‘mine’” stage doesn’t occur or lead up to an altercation. Also, to help with the possessiveness, it wouldn’t be an awful idea to train both dog’s separately. In fact, it would be much easier on both pets as well as yourself.

Remember, even if tension is created from the presence of the new pup, it is only temporary! Simply consider the well-being of both pups and before you know it the two will be inseparable. For a more detailed reading on this, please visit www.akc.org.

Looking for a head start on obedience?